What to Know About Stinging and Biting Insects Inside Your Home

For many of us, getting bit or stung by an insect is the largest threat of pest infestations. Even when one wasp or tick that follows us inside is enough to send us reeling, not to mention a full infestation. Luckily, the right professional exterminator can help you manage stinging and biting pest problems without having to put your own safety on the line. 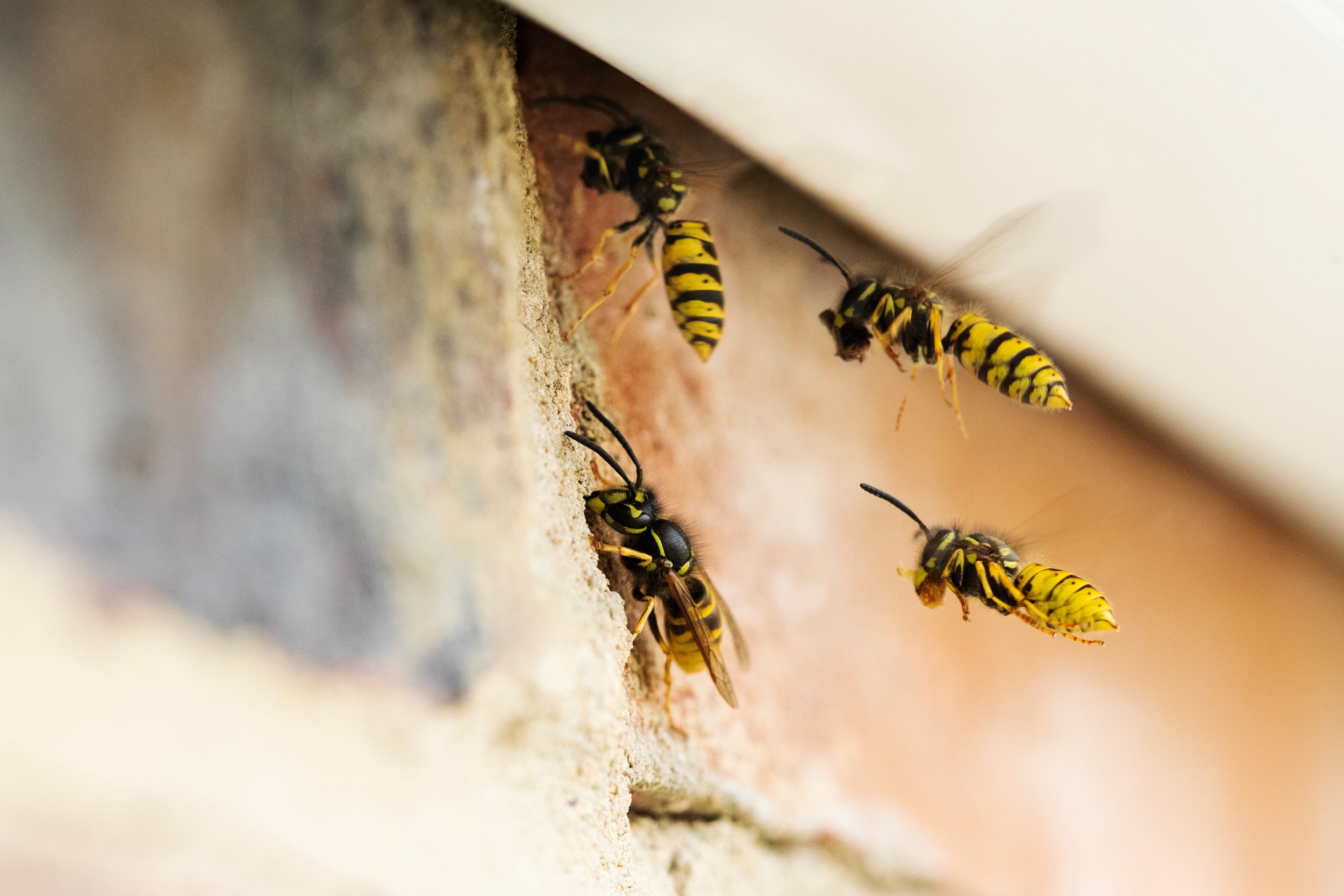 In this guide, we’ll help you identify common stinging and biting insects, how they get into your home, and what to do if you come across one in your space.

Why Do Insects Bite or Sting Humans?

Pests like insects and rodents have different reasons for attacking or feeding on humans. While some are attracted to mammal’s blood to stay alive others are simply trying to protect themselves when they feel attacked.

For example, in many cases, insects with stingers will not typically be aggressive toward humans or animals unless they feel that their home is under attack. This is why it is so important to safely remove wasps, bees, and hornets from your home without making them feel threatened.

Ticks, fleas, and bed bugs, however, are another story. These insects need you to stay alive. Not only are their bites painful and irritating, but the bugs can also carry disease, leading to the threat of infection or severe allergic reaction.

Identifying Biting and Stinging Insects in Your Home

One of the initial ways that you’ll even know you have a stinging and biting insect infestation are the bites themselves. Many of the infamous culprits on this list are adept at hiding themselves while others may only come out at night.

We’ll start off by determining what each of these creatures looks like, what causes them to bite humans or animals, and how to identify the bites themselves.

Wasp species vary throughout the US, and while some are more aggressive than others, they will typically avoid you unless threatened. From paper wasps to hornets and yellowjackets, an infestation in your home requires immediate professional assistance to avoid harm.

Appearance: Depending on their species, wasps, hornets, and yellowjackets are flying insects, typically with segmented bodies, long wings, and dangling legs. Their coloring ranges from black and brown to yellow and red.

Why they sting: Paper wasps and hornets will only sting if they feel their own safety or the safety of their nests is under siege. Avoid interacting with these creatures or their nests if you find one in or around your home. yellowjackets can attack even when not provoked, so take extra care if the insect has a yellow-striped back.

How to identify a sting: Wasp stings are typically quite painful and will cause redness and swelling. You are unlikely to miss a sting as soon as it happens. However, the reaction should go away in a matter of a couple of weeks. If you experience hives, severe swelling, or breathing issues, contact a medical professional.

These disease-carrying pests can quickly multiply inside your home, especially if you like in a humid region or near a body of water. Any presence of mosquitoes in your home can take off quickly without intervention, especially if they have easy access from the immediate perimeter of your home.

Appearance: Mosquitoes are small black flying insects with legs greatly disproportionate to their bodies. Female mosquitoes—typically the smaller of the couple—are the only gender that bites, so you do not need to worry about the larger males when it comes to bites.

Why they bite: These parasites thrive off the blood of birds and mammals, especially humans. Factors like your warm body temperature or CO2 from your breath will alert mosquitoes of your whereabouts. Their saliva contains a chemical that leads to skin reactions when bitten.

How to identify a bite: Depending on your body’s allergy response, mosquito bites can range from small red bumps to larger, swollen welts. They will typically dissipate in about a week.

Though ticks are more likely to congregate dangerously outside your home, they can come indoors for warmth or the temptation of a food source—such as you or your pets. If you detect ticks in your home or your yard, contact a professional for assistance to avoid the threat of tick-carrying diseases.

Appearance: A tick can typically only grow up to an eighth of an inch in size. They have hard backplates, eight short legs, and a rounded body. While some ticks are fully black, others may have spots or small markings on their backs. Different species may range in size and color.

Why they bite: Similar to mosquitoes, ticks are parasites that live off the blood of mammals. They will typically push their mouths and a part of their bodies into their host’s skin to feed, leading to more severe bites and wounds.

How to identify a bite: In some cases, you may be able to identify a tick bite by still finding the tick attached. When this occurs, use a pair of fine-tipped tweezers to slowly remove the tick while avoiding twisting or pulling the tick too hard.

Most tick bites look similar to other flea or mosquito bites, but when a bullseye circle appears around the bite, it’s important to speak with a doctor immediately to test for infection or disease.

Fleas often travel indoors on pets, luggage, or birds that nest near your home. Once fleas build an infestation inside a home, it can be difficult to target their nests since they are excellent at hiding and laying eggs in hard-to-reach spots. Call an exterminator at first signs of detection of a flea.

Appearance: Though they are visible by the human eye, fleas will only span a few millimeters. They range from reddish-brown to black and have six legs that hang down from their bodies. They are excellent jumpers and can even appear as if they are flying.

Why they bite: Fleas are another species of parasites that target pets and humans inside their homes. They will feed on your blood and even feed several times throughout the day. By hiding out in furniture, carpets, or cracks in your home, fleas can build safe nests and multiply quite quickly.

How to identify a bite: Flea bites can appear in lines and groupings, often as small red dots or welts. These bites can often be mistaken for bed bug bites due to their patterns. Fleas, unlike bed bugs, are easier to spot and kill by hand, often just after they feed.

As one of the most dreaded infestations in the country, bed bugs can be both difficult to spot and very expensive to eradicate. They often travel with you after a trip out of town, particularly to a hotel or home unaware that it had an infestation.

Appearance: Despite popular belief, it is possible to spot and identify a bed bug, but they only range between four and eight millimeters on average. They will typically appear anywhere between brown and red, darkening in color after feeding.

You are more likely to find signs of bed bugs—such as blood spots in bedding or leftover shells—than frequently spotting the bugs themselves.

Why they bite: Bed bugs are yet another type of common parasite across the US, feeding on the blood of humans and pets. They can even emit an anesthetic chemical when biting to keep their host from knowing they’re being bitten.

How to identify a bite: Bed bug bites notoriously appear in lines since one bed bug will typically feed on one host many times in a row. Bites will appear red and slightly swollen and will be very itchy.

You only like to find scorpions in semi-arid parts of the country, particularly the western pacific states and throughout the southwest. Scorpions are nocturnal and will remain hidden to avoid the hot sun or predators. Since they prey on other pests, you are more likely to find them if you have other infestations.

Appearance: There are several different species of scorpions throughout the US, only one of which has a venomous bite enough to cause a severe reaction. Scorpions will typically range between 1-4 inches long, have a brown, tan, or black segmented body, and have a long, extended tail with a stinger at the base.

Why they sting: Scorpions will typically only sting humans if they feel threatened. They depend on using their venomous stinger to kill prey, but will protect themselves from larger animals and humans if necessary.

How to identify a bite: Scorpion stings can appear similar to large bee or wasp stings. They will produce sensitive and painful, raised welts. In most cases, the sting will heal on its own, but any neurological reactions should be addressed immediately.

How to Prevent Stinging and Biting Insects in Your Home

Of all the varieties of pests in your home, stinging and biting insects should be at the top of your priority list to look out for.

While stings from wasps, bees, and scorpions can lead to extreme reactions, the bites from parasitic bugs can carry dangerous bacteria and disease. Here are a few things to know about preventing these insects from entering your home and growing into an infestation.

Infestations from the smaller insects on this list—such as fleas, bed bugs, and mosquitoes—often begin with bites. If you haven’t recently spent a great deal of time outdoors around mosquitoes, it’s important to investigate whether the bites are coming from inside your home.

All stinging and biting insects will also leave signs of their presence around your house. These may include:

Close Up Your Perimeter

The most important step to keeping stinging and biting insects out is to keep them from coming indoors. Seal up any cracks or rips in screens and weather-proof windows and doors to keep small pests from slipping in through small spaces.

Wasps, hornets, and yellowjackets may build nests on the eaves or corners of your home, but are able to build inside if there is damage to the outside of your home’s architecture. Be sure to check your home for damage after a major storm or extreme weather like ice and snow.

Some insects, like fleas and bed bugs, can also travel inside with your pets, packages, or luggage. Before anything comes inside, give them a quick check for bugs that may have hitched a ride.

Insects around the outside of your home are the easiest way for insects to be tempted indoors. Remove any stagnant standing water to avoid mosquito infestations in your yard, cellar, or garage.

Wasps, hornets, and yellowjackets, though necessary parts of a healthy ecosystem, can be kept under control by lowering the pest population that they prey on. A professional exterminator is the only one who should attempt to remove a nest, however, as taking care of it yourself can be dangerous.

As is the case with prevention methods, treatments vary significantly when it comes to getting rid of biting and stinging insects. However, the majority of DIY treatments include:

Smaller pests, such as fleas and bedbugs, are not dangerous to attempt to manage on your own. However, stinging pests that swarm or attack should always be handled by a professional to avoid harm.

When to Call a Professional

You shouldn’t have to go it alone when handing pests that can become aggressive or cause dangerous bites and stings. At Aptive Environmental, we’ve helped over a million people across the country get rid of stinging and biting insects with eco-friendly treatments.

After an initial consultation and thorough inspection of your home, we will construct a customized plan to eliminate pests inside your particular space, offering unique suggestions of how to both keep pests from your home all year round.

Above all, we aim to provide peace of mind from January through December, ensuring that you never have to wonder about your safety from these harmful insects.