Your Guide to Spider Infestations in the Home

Even if the sight of a spider doesn’t send you running for shelter, finding one in your home can be very unnerving. After all, it’s unlikely that the spider wants to be inside your house in the first place, and if it does, it could be the sign of a larger pest issue. 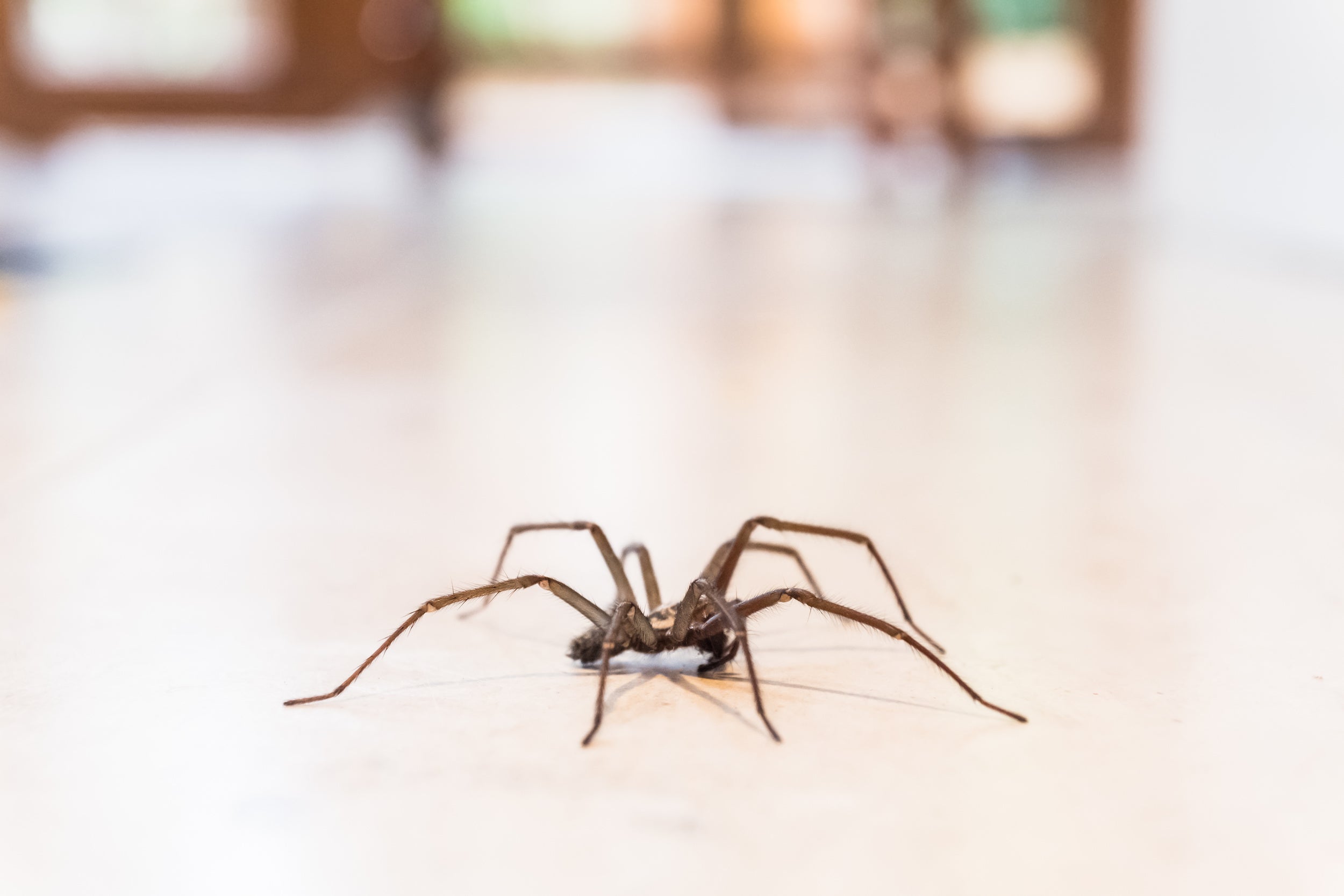 Spiders will often only take the time to build a web if they think they’re going to catch insects, but you do not need to worry about a spider coming after you. Like ticks or fleas, spiders don’t live on the blood of animals. However, there are thousands of spider species in the US, two of which can bring a painful and even venomous bite, so it’s best to keep your home spider-free.

We will help you figure out what type of spider is inside your home, which factors attracted them indoors, and how to safely remove them. When there’s any doubt, however, an exterminator is your safest way to remove pests from your home quickly and efficiently.

Spiders are important members of our ecosystem and can be very integral to a balanced food chain. However, there are no instances when a spider should—or probably wants to be—inside your home. When you find a spider in your yard or garden, they are typically doing their job of controlling the insect population.

Certain species of spiders can also be quite dangerous, and if you’re not sure what type of spider you’re dealing with, it’s best to leave it alone and wait for a professional. For example, the brown recluse and black widow spiders are the most dangerous in the world, while other spiders can inflict painful—albeit, not as dangerous—bites when provoked.

Even if spiders are helpful to our balanced ecosystem, it’s best to address the reason why they feel the need to come into your home in the first place.

Spiders make their way indoors through any small crack, crevice, or vent that allows them to slip inside. It is also common to carry spiders in with bags and boxes by accident. Spiders will only come into your space voluntarily for warmth, a place to lay eggs, or to catch food.

Since spiders are carnivores, they are more attracted to homes with an abundance of smaller insect infestations like flies and mosquitoes. They use their fangs to kill their prey, often injecting them with venom.

The female will typically live much longer than the male, up to a couple of years. Male spiders will even die after mating just a few times. When female spiders lay eggs, they will wrap them up in a protective egg case. These sacs can have hundreds of eggs in each batch and a female may lay hundreds of these in her lifetime.

Identifying the Spider in Your Home

Spiders are arthropods with eight legs and a rounded, often-segmented body. You typically encounter hundreds of species of spiders in your local region, possibly without ever knowing it.

The two spiders to keep an eye out for—the black widow and brown recluse—are relatively easy to identify, so you can be pretty sure that the other shocking-looking creatures are more ugly than threatening.

We’ve included six of the most common spiders found in homes throughout the US, though this list is far from comprehensive.

Garden spiders belong to the orb-weaver family, and as their name suggests, are typically found outside in trees, bushes, and flower beds. If you spot one of these colorful spiders indoors, it probably got there by accident.

Appearance: Garden spiders can grow as large as up to 1 inch and have long legs with two claws at the end of each one. Females will have bright yellow markings on their backs while the males will appear browner and less vibrantly colored.

Are They Dangerous?: Despite their shocking appearance and size, garden spiders pose no threat to humans. They aren’t known to bite humans and if they did, their venom would not be strong enough to spark a reaction.

On the other side of the spectrum, the black widow spider is one of the most dangerous and feared spiders in North America. They enjoy dry and dark spaces and are often found in the southern and western-most states in the US, including southern California.

Appearance: Black widow spiders can grow between one-eighth of an inch and over an inch long. They have large black abdomens with distinct red markings on its back, often resembling an hourglass. You may be able to spot their webs due to its disorderly design.

Are They Dangerous?: Though the black widow spider bite is rarely fatal, it should be addressed by a doctor immediately. The bites can cause severely painful reactions, especially in elderly people and children.

As another spider with a potentially painful bite, these large northwestern visitors are best avoided unless you have the help of a professional. Like other pests, hobo spiders will only come indoors if they sense that they have access to other food, in this case, insects.

Appearance: These recognizable spiders range from tan to dark brown and often have a criss-cross pattern on the back of their abdomens. They are known for hitching a ride on items to come indoors, hence their names. Females are much larger than the males, growing up to ⅔ of an inch long.

You may also be able to identify their webs based on their funnel-like shape.

This family of spiders is the most common species found inside homes. Due to their general coloring, it can be easy to mix them up with some of the most aggressive or dangerous spiders. They are most commonly found in the Pacific Northwest and California.

Appearance: These spiders typically range from gray to brown but have a large range of markings on their backs. They also have particularly long legs and also create funnel webs to catch prey. You are more likely to see the male away from the web while the female guards the web as he searches for food.

Are They Dangerous? This group of spiders will often stay close to home once they build a nest with abundant food. Though they rarely bite humans, if they do, bites are not known to harm humans.

This species of spider may be aggressive with its prey, but it is not typically aggressive with humans unless it feels threatened. Wolf spiders may find their way inside your home in the winter, so it’s important to remove them with care if you do come across one.

Appearance: Wolf spiders are often brown or gray with a variety of darker markings throughout their bodies. They can grow to be up to 1.2 inches and as small as a quarter of an inch. They are also known for having a very distinct eye arrangement, with a set of eyes set back on its head in addition to the ones in front.

Are They Dangerous? Even if you are bitten by an aggressive wolf spider, its bite is not life-threatening. Bites can, however, become swollen, itchy, and even painful.

If you live in one of the regions where brown recluse spiders are prevalent—such as the south and midwest—it’s important to know how to look for these dangerous creatures. Brown recluses like to hide in dark, hidden places, especially those that go undisturbed such as piles of boxes in the attic.

Appearance: Brown recluse spiders range from tan to brown with a dark marking on their midsection. One of the best ways to distinguish a brown recluse from other spiders is their monotone legs. Their identical legs do not include any stripes or spots. They can grow up to about ¾ of an inch.

Are They Dangerous? Brown recluse bites are one of the only ones to look out for in the US. Pain, swelling, and redness often occur up to 2-8 days after the bite itself. In rare cases, the skin around the bite may lead to skin necrosis.

Signs of a Spider Infestation

In addition to spotting multiple spiders themselves, there are ways to detect if you have to worry about a spider infestation. A few spiders wandering around your home are incredibly common, especially if you live in a rural area and they spend their days in the garden. A few additional signs include:

What to Do if You Find a Spider in Your Home

It’s important to stay calm when you see a spider in your home. Though many of them are quite frightening looking, they will rarely cause you harm. Still, if you are unsure about what type of species you’re dealing with, call a professional for identification assistance.

Individual spiders that are not harmful can be removed safely by placing them under a cup and carrying them safely outside. You can also find special devices for safely gripping spiders from afar to remove them from your home.

After removing the spider, look around the room for signs of a nest, egg sac, or web. Removing these items is the key to keeping yourself from forming or growing an infestation.

You can also check access to the outdoors in the room such as brown window screens or cracks in the walls or siding.

The spider may have been attracted to that particular spot in your home because of other small pests such as fruit flies or ants. For extra protection, clean the room one last time and clear away clutter to check for other spiders.

Spiders are particularly hard to trap or stop with traditional poisons and repellents. Their body shape and long legs protect them from picking up simple poisons as they travel. However, there are some homemade and store-bought options for controlling spiders.

If you’re trying to catch one rogue spider in a room that you haven’t been able to remove, the stick trap could stop them in their tracks. This is not ideal, however, if you have a spider infestation since the eggs will still be left behind.

General insect sprays can also kill spiders, but you generally need to spray them on the spider themselves. You can also use residue sprays to attempt to kill remaining spiders, but if the issue persists, this may require frequent reapplication.

As is often the case with pests, this natural product will kill spiders when consumed. Sprinkle the mixture in trouble areas around your home such as near baseboards, around storage areas, and under furniture.

Many spiders are repelled by the scent of oils such as peppermint, tea tree, witch hazel, or lavender. Dilute several drops in a spray bottle of water and use it throughout trouble spots in your home.

Be sure to check the safety tips for each oil if you have pets or children that could end up with the oils on their paws or hands.

Prevention will always be your best defense against spiders inside your home. Here are some simple tips for a spider-free space:

When to Call a Professional

The attentive and experienced experts at Aptive are here to help whether you’ve found one startling spider or a family of spiders in your home. Professional exterminators can help you identify for the type of infestation as well as its size.

After an initial consultation, we will build a customized spider extermination and protection plan to both keep spiders out of your home and take care of the ones that made it inside. Additionally, we work with eco-safe products so you don’t have to worry about harmful and distributive smells and chemicals in your space.

Spiders belong outdoors but commonly find their way inside your home by accident. Speak with an Aptive exterminator today to ensure your home is spider-free for good.