How To Get Rid Of Ambrosia Beetles

Homeowners throughout the United States routinely deal with a variety of tree pests, one of the most damaging of which is the ambrosia beetle. This invasive species is responsible for a significant number of tree deaths each year, and they can weaken dead trees to the point where they become a hazard on your property. 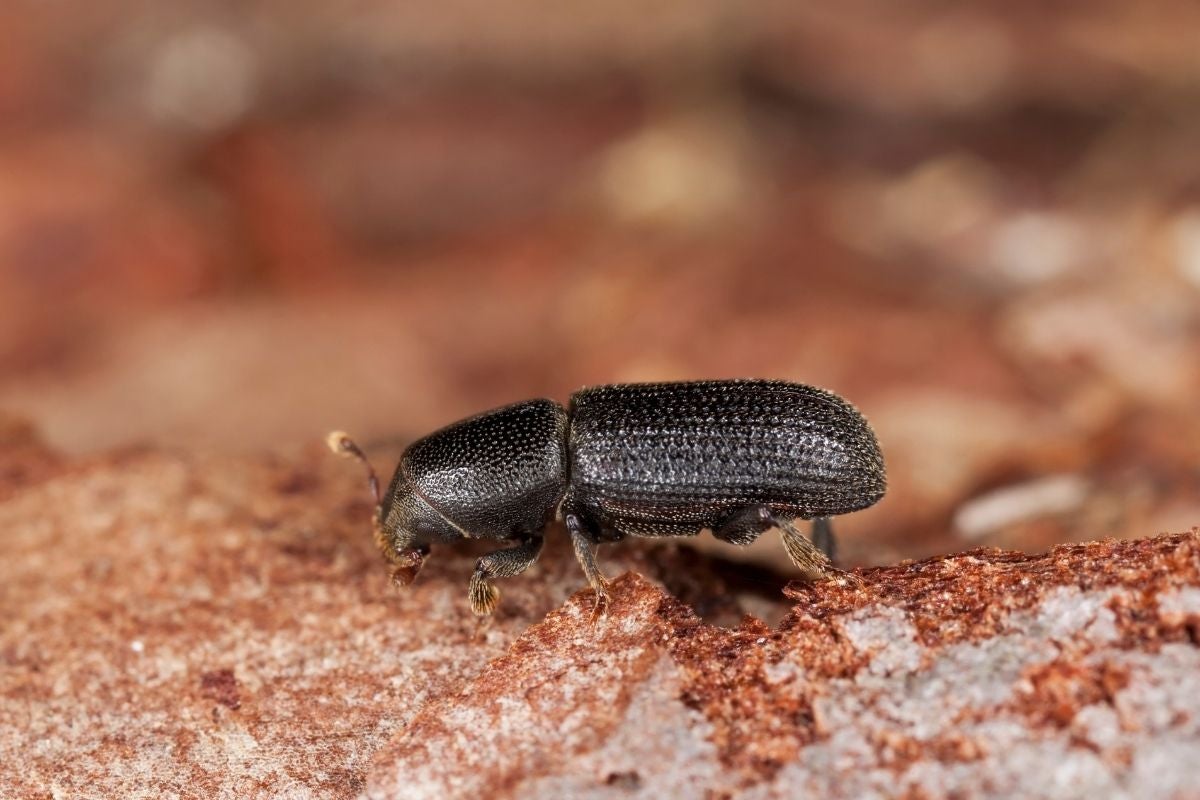 What Are Ambrosia Beetles?

Ambrosia beetles are very tiny and often go unnoticed by the naked eye. They’re pill-shaped, dark red or brown, and grow to between ⅛” and 3/16” long. When they attack a tree on your property, they burrow through the bark and settle into the softer wood below. As such, they typically aren’t visible, and you need to rely on symptoms of an infestation to identify if your tree is being attacked.

Symptoms of an Ambrosia Beetle Infestation

Although ambrosia beetles are challenging to see and identify because of their small size and ability to bore beneath the bark of your tree, there are several symptoms you can look for that can help identify an infestation.

The most obvious sign that your tree is infested by ambrosia beetles is the presence of “sawdust toothpicks” hanging off of the trunk or large branches. As the beetles bore through the bark and into the sapwood, they leave behind the wood they remove. Eventually, the tree debris gets pushed out of the entrance hole.

The compressed sawdust can protrude from the entrance hole for several inches before it’s broken by rain, wind, or other animals. The result is thin tubes of sawdust that look like curved toothpicks coming out of the trunk.

Even if the sawdust toothpicks are broken before you identify them, you’ll likely be able to see entry holes in the trunk. Ambrosia beetle holes are about the thickness of the graphite part of a pencil. They’re round and about 3-5mm in diameter. Your tree could be bored through by just one beetle or hundreds. The worse the infestation, the more obvious the entry holes will be.

Black Stains on the Trunk

When ambrosia beetles bore through your tree, they leave behind ambrosia fungus. This fungus is detrimental to living trees and can quickly cause tree death. The fungus leaves a black coloration around the boring holes and inside the sapwood.

Frass Around the Tree

Eventually, the sawdust toothpicks will break off and fall to the ground. The sawdust — called frass — will collect around the base of the tree in significant amounts if the infestation is severe. If you notice sawdust collecting around your tree, there’s a good chance you have an ambrosia beetle infestation.

When ambrosia beetles bore into the sapwood beneath the bark, they destroy the xylem and phloem, which are the mechanisms by which your tree transports water and nutrients from the roots to the branches and leaves. When branches no longer receive the required nutrients for healthy growth as a result, they’ll begin to die off at the ends or wilt.

If you notice leaves dying or withering on the ends of the tree and can’t link the issue to the season, your tree might be suffering from an ambrosia beetle infestation.

How Do Ambrosia Beetles Affect Trees?

Different species of ambrosia beetles affect trees slightly differently. The most damaging species, and one of the few that attacks living trees as well as dead and dying ones, is the granulate ambrosia beetle (Xylosandrus crassiusculus).

This invasive species from Southeast Asia is a severe issue in the Southeastern United States, particularly in North and South Carolina. Cities like Charlotte, Charleston, Greensboro, Durham, and Columbia have all experienced massive tree death as a result of ambrosia beetle infestation. Often, these infestations require professional tree removal to prevent surrounding trees from becoming attacked.

Most of the damage done by the granulate ambrosia beetles is from their destruction of the sapwood. This area of the trunk just beneath the bark is where the tree houses its nutrient transportation system. Any significant damage to the sapwood will prevent the tree from distributing water and nutrients it picks up from the soil to the branches and leaves. If the infestation gets serious enough, your tree will rapidly die due to the sapwood damage.

Ambrosia beetles also secrete ambrosia fungus into the heartwood once they have burrowed deep enough. In the heartwood, the beetle will carve out a small cavern to lay its eggs and then secrete the fungus to act as a food source for larvae. The fungus deteriorates the wood, further destroying the tree. Infested trees typically die due to the destruction of sapwood, but the fungus accelerates tree death in most cases.

How to Get Rid of Ambrosia Beetles

Unfortunately, eradicating an ambrosia beetle infestation is nearly impossible. Insecticides have proven to have minimal effect on ambrosia beetles that have burrowed into your tree. Your best bet is to remove the infected portions of the tree if possible.

Once you complete a thorough inspection of your tree for entry holes, you can cut off limbs or branches that show evidence of an infestation. It’s possible that this will remove all of the ambrosia beetles in your tree, but it’s unlikely to be wholly effective.

Unfortunately, over-pruning, especially in the case of a severe infestation, can actually make the ambrosia beetle issue worse. This invasive species most often attacks stressed trees rather than perfectly healthy ones. Pruning more than 20% of a mature tree is very likely to leave it more prone to infestation and disease.

In most cases, ambrosia beetle infestation of a tree will need to result in total removal. Herbicides to treat the ambrosia fungus and insecticides used in an attempt to kill the beetles are very rarely effective. In most cases, the applications will fail to treat the problem and instead stress the tree further, making the issue worse.

The best course of action for a heavy ambrosia beetle infestation is to call in an expert to remove the afflicted tree. Complete removal will help prevent the spread of infestation to other nearby trees.

It’s critical that you don’t attempt the removal yourself. You could unknowingly cause the beetles to leave the tree and travel to another nearby food source, and improper disposal and stump removal can leave your property with an even larger ambrosia beetle problem.

How Can You Prevent Future Infestations?

As mentioned above, ambrosia beetles — even the species that attack living trees — most often infest stressed or dying trees. Therefore, keeping your trees in the best condition possible is the most effective way to avoid an infestation.

You can begin by ensuring that your tree receives ample sunlight and water year-round. Mulch around the base of the tree to help maintain good soil moisture below and ground temperature. Fertilizer shouldn’t be required for mature trees, but our arborists can help you decide if a treatment would be beneficial.

You should also make sure that your tree is appropriately pruned at least once a year. Untamed tree growth can be erratic and even detrimental to the tree, leaving limbs to compete with one another for sunlight and resources.

Some homeowners in the Southeastern United States, where ambrosia beetles are a significant problem, opt to apply a preventative insecticide to the bark of their trees. Routine application is advisable, but you can choose to apply to your trees only when they are visibly stressed or others in the vicinity are infested with ambrosia beetles.

Permethrin and bifenthrin are two of the most popular choices for preventing ambrosia beetles. You can spray these on the bark yourself if you get the insecticide from your local home improvement store. Commercial applicators have access to a more robust and successful insecticide that can keep your trees even better protected.